It’s always hard to make a choice of who to help when disaster strikes.  While driving to work one day, I heard interviews on NPR of survivors who had experienced the devastation of Hurricane Harvey.  The pain in those voices and the dire circumstances of the victims helped us decide to do a relief trip to Houston.  Yet, as we were planning the trip, Hurricane Maria hit Puerto Rico causing many deaths, knocking out the island’s electrical grid, and destroying thousands of homes.  After Maria, one person asked me where we were going. I replied that were going to help the folks in Houston. Why?  Because KIRF had made a representation and commitment to people in Houston that we were coming to help. 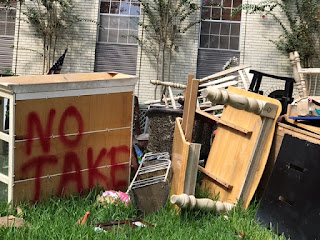 “HUD is now collecting rent in September….” “The flood waters were 14’ deep destroying our home.” “ I slept in an attic with an axe before I was rescued.” “An elderly woman stayed in her flooded house for five days before her daughter could rescue her.” “A barista who lost his job due to the floods and has been living in an overcrowded hotel, with loud noises and dogs barking all night, only getting two hours of sleep each night.” These were parts of the stories I heard as we assessed the damage and needs the first day in Houston.

While we were assessing damage and interviewing people in the Clear Creek and Frendwick districts of South Houston, we met the Noe, the pantry manager at the Interfaith Caring Ministries in League City.  He told us that they had plenty of donated food but still needed cleaning supplies.

We next met Jeanne, the Coordinator for the Prevention and At Risk Services for the Clear Creek Independent School District. This school had converted one of their gyms into a temporary housing facility for the flood victims and the other gym was used as a  donation center for clothes and cleaning supplies.  Jeanne told us that about a 100 students and teachers in their elementary school classes had lost their homes. What some of these people needed the most was Walmart gift cards because they did not yet have a place to live and store stuff. They were still living in temporary housing or in hotel rooms six weeks after the hurricane's flooding ruined their homes.

Later in the day we interviewed people at University Baptist Church. Chis told us that the church volunteers had “mucked out” (ripped out all the moldy drywall) 175 homes. Also, that they had just received a semi-truck loaded with drywall.  They had enough support to purchase screws, tape and drywall mud to re-drywall the homes.  However, he knew of families who were food insecure. He put us in touch with a parishioner, Sujata, who had been feeding these families out of her own pocket in the badly flooded area of Bayridge. She emailed us wish lists created by these families who had been hit hard by the hurricane. They needed nutritious food items, cleaning supplies, toiletries, feminine supplies, and baby products. 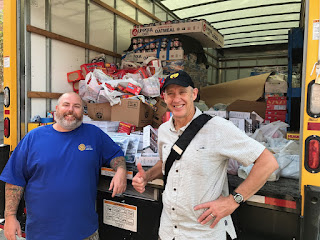 So, wish lists in hand, we took our trusty Penske rental truck to Home Depot, Walmart, and finally Costco and purchased items based on the wish lists and our own assessment interviews.  We also purchased Walmart gift cards for the students and teachers of the elementary school who were still living in temporary housing.  Once the truck was completely filled with supplies we drove to the University Baptist Church. After we finally unloaded the truck, we had a late dinner and a beer at 1:30am early Saturday morning.

We started again later that same morning at 9:00am by meeting more volunteers from the Space Center Rotary at the University Baptist Church. We unloaded the truck and with the wise advice of Fausto, the Church facilities director, using a large meeting room in the Church to stage filling our "relief bags" with the above items on the wish lists. Each relief bag consisted of a construction grade large 50 gallon plastic sack, packed full.  We were helped by patrons from this church and other churches to stuff the bags.  Then we loaded the truck and drove to a neighborhood in Bayridge and began a long day of knocking on doors and handing out our large relief bags of supplies.  We helped about 60 families in this community.

During our delivery of aid to a flooded neighborhood, a volunteer with us knocked on a door to ask if the occupants needed food or supplies.  An elderly woman answered the door leaning on a cane.  The smell of mold was overwhelming as she opened the door.  We asked if she needed help. She invited us in to look around.  A pile of her personal belongings was in the center of her living room. Drywall was cut off of the walls from the floor to 3’ high and the studs were black with mold.  She was 92.  We asked her why she was still in the house because it smelled so bad. She said she was waiting for FEMA to assess the value of her destroyed goods.  Hurricane Harvey had struck six weeks ago. 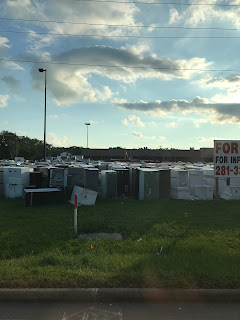 After Bayridge we drove to Dickenson.  It was devastated. The streets reeked of mold and rot and were devoid of people or cars.  Not one person seemed to be at home. We drove around for about an hour and finally saw a small church that was accepting donations.  The Lighthouse Baptist Church’s hours of disaster relief assistance for the community had been cut back because of a lack of donations. So, when we showed up, the man in charge, Rick, was very happy to see us.  We unloaded approximately 60 more relief bags for distribution in Dickenson and Rock Port- two very badly damaged areas.

In total, we provide aid to approximately 200 families who were displaced or still living in badly flood damaged homes in Houston, Texas. We could not have performed our 48 hours of disaster relief, September 15-17, 2017, in Houston without the dedicated, hard working, and always-ready-for-good-laugh Rotary volunteers Greg and Courtney.  Greg was our fearless flatbed truck driver and Courtney kept us laughing after 20 hours straight of non-stop relief work.  Our success would not have been possible without the generous support of KIRF’s generous donors, the Rotary Club of (Downtown) Ventura, and Lion’s Club of Ventura, and the tireless work and incredible hospitality of members of the Rotary Club of Space Center in Houston, Texas. 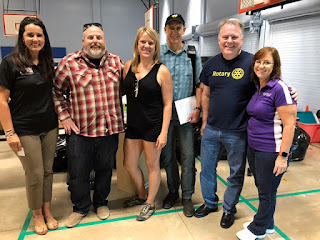 Posted by Angela Kirwin at 2:00 PM No comments: