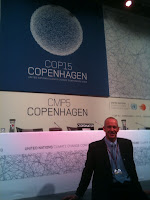 We are now halfway through the second week of the COP15, climate change talks in Copenhagen. It appears that there is general acceptance that there will not be one treaty. Instead, the parties are working on two separate tracks, one under Kyoto Protocol (AWG-KP) and the other under Long Term Cooperative Action (AWG-LCA). As a result, there are discussions of two separate treaties.

As one can well imagine, the negotiations are very tough at this stage. The ministers of the countries are arriving and now working in the negotiations. The negotiators must answer to their countries. And, the world expects results at COP15. There are strenuous objections to certain text to the proposed documents and also concessions so that no particular party is pictured as the one stalling the negotiations. The contact group chairs are working very hard to build the bridges necessary for consensus by the Parties to the text.

As I write, negotiations are underway for the contact group on other issues for the AWG-KP on further commitments for the Annex I Parties. The Parties are discussing greenhouse gases, sectors and source categories; common metrics to calculate the carbon dioxide equivalence of anthropogenic emissions by sources and removals by sinks; and other methodological issues.

In the earlier session, the Draft decision -/CMP.5 for consideration of information on potential environmental, economic and social consequences, including spillover effects, of tools, policies and measures. This draft decision will now be sent to the Chair of the KP for consideration. This is one area where mediation can be used as a mechanism to resolve conflict under the potential consequences that will arise under the treaty and climate change from the local to international levels.
Posted by P. Mark Kirwin, Esq. at 9:47 PM